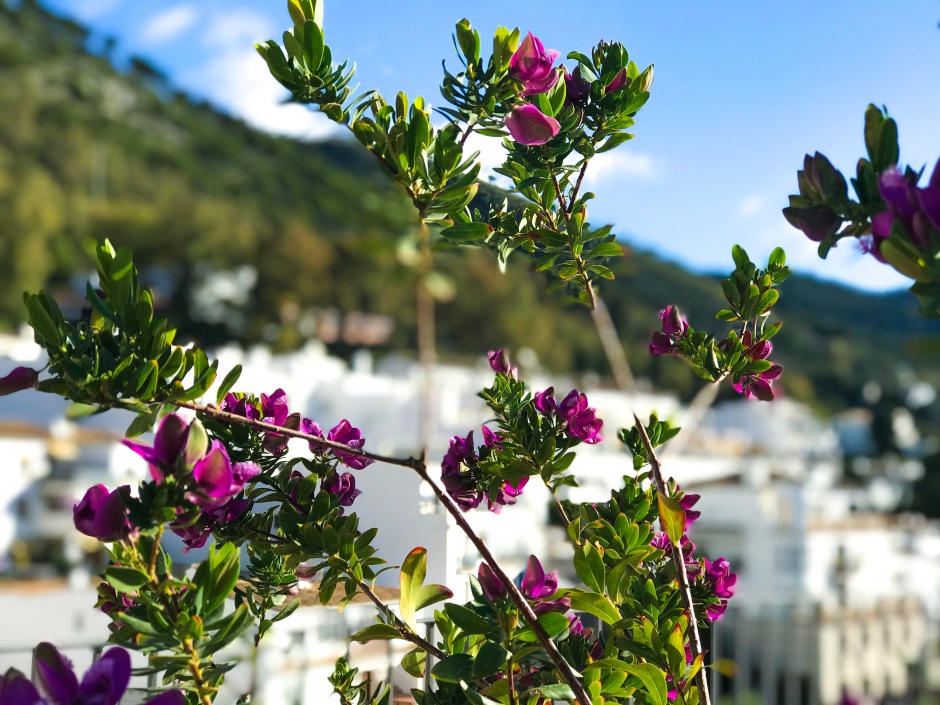 If you adore the quaint and charming, you won’t want to miss the Spanish village of Mijas Pueblo.  It lies on the southeastern coast of Spain, in the heart of Costa Del Sol.  This Andalusian  village is filled with white washed buildings, narrow, cobblestone streets and balconies overflowing with colorful flower pots.  For me it was love at first sight!

The delightful village of Mijas Pueblo clings to a hillside about 1500 feet above sea level and offers incredibly picturesque views of the dazzling Medeterrainian Sea.  We arrived in Mijas after about a 45 minute bus ride from the port that zigzagged up the steep roads of the Sierra de Mijas mountain  range.  As we approached the village, we could see lovely, Spanish homes all in the same white washed style as the lovely Mijas.  As we traveled closer to our destination, I knew I was in for a a treat!

The first thing I noticed after stepping off the bus were the breathtaking views of the Mediterranean Sea.  The sky that day was so incredibly blue and the sea simply sparkled in brilliance below.

As we began to wander the narrow streets and alleys of this quaint Andalusian village I became captivated by it’s Medieval charm.  We strolled up and down alleys that connected the various levels of the village and I was enthralled with the lovely potted flowers and plants that adorned steps and balconies throughout the village.

The white washed buildings are full of shops filled with hand made pottery, paintings by local artists and leather goods.  The pottery is colorful and beautiful and I was so tempted to purchase some, if only I had room in my bags to bring it home!

The Mijas settlement has a rich history and is known to have existed for centuries, beginning with the Romans and Greeks in the 2nd century.  The Romans called the village Tamisa, which over time has been shortened to Mijas.   It was a prosperous little village due to the wealth of minerals in the nearby mountains.  It was later inhabited by the Moors, who abbreviated the name to Mixa.  Over time, numerous other cultures claimed Mijas as their own and Mijas has been subject to many attacks, including those of pirates.

The charming church,  Our Lady of the Virgin of the Rock, was completed in the early 18th century and covers the ruins of a Moorish castle dating back to the 8th century.  According to legend, two young shepherds saw a white dove that turned into an apparition of the Virgin Mary.  The festival of the patron saint of Mijas is celebrated every year with a procession.  The peaceful setting and incredible views also make this area a popular venue for weddings today.

Today Mijas is home to many local artisans and is visited by a vast number of tourists every year.  In 1969,  Mijas was declared a Historic -Artistic village, and is now being authentically preserved.

Although, I can imagine at certain times Mijas could be quite overrun with tourism.  However,  we arrived quite early in the day and practically had the place to ourselves. Not all of the shops and restaurants were open, but we were able to walk around and enjoy Mijas’ charms without fighting throngs of people.  Personally, I was enchanted by the lovely white washed village and colorful potted flowers.  I only regret that I didn’t have more time to wander the narrow streets and take in the beautiful panoramic views of Mijas.

Thanks for stopping by – Gerri